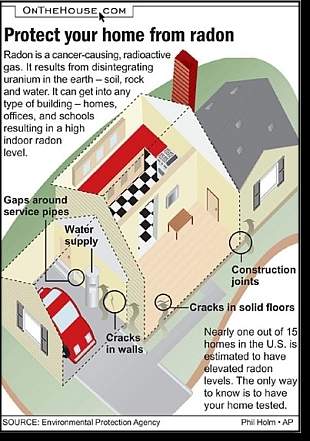 Radon in Your Home

Radon is an invisible, radioactive gas created from natural deposits of uranium and radium in the soil. Uranium breaks down to radium, which in turn decays into radon gas.

Radon is an inert gas, which means it does not react or combine with the elements in the ground. Because of this, radon can move up through the soil into the atmosphere, where radon is easily diluted and presents little concern. However, when radon enters a building from the soil below, it can accumulate and become a health concern.

Radon can move up through the ground and enter buildings through cracks and holes in the foundation. Radon levels are generally highest in basements and groundfloor rooms that are in contact with soil.

Factors such as design, construction, and ventilation of the home can affect the pathways and forces that draw radon indoors. According to a national residential radon survey completed in 1991, the average indoor radon level in the United States is 1.3 picocuries per liter (pCi/L). The average outdoor level is about 0.4 pCi/L. However, not all houses or buildings--even those in the same area or the same neighborhood--have the same radon level. The only way to know if you have a radon in your home is to test for it. Tests should be performed in the lowest lived-in area of the house. 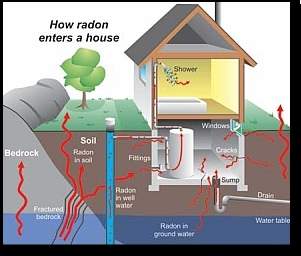 Several studies have been done to determine radon levels in Idaho and different results have been found each time. In 1985 and 1986, state and local health officials screened 1,018 homes for radon. Approximately one-third of the homes had high levels of radon. In 1989 and 1990, Idaho and EPA conducted a joint survey intended to be more representative of the entire state. A two-day charcoal canister test was used by 1,142 homeowners. The results, received in January 1992, indicated that more than 20 percent of the homes in Idaho had high levels of radon. Since 1990, the state radon project has been tracking the number of tests reported in Idaho.

As of August 2005, 6,668 homes have reported results to the project with 37% of the homes testing high for radon. It is difficult to predict which homes may have high radon levels. Homes built side by side, on the same soil or rock, or with similar designs, can have very different radon levels. Therefore, it is recommended that all homes be tested.

Radon in Your Water